skip to main | skip to sidebar

"In the depths of the eye of terror, on those worlds bound in blood, demon and machine have become fused, cohabiting the same metal shell. These lumbering metal behemoths act as warp conduits, summoning warriors and demons from across the stars into battle. The Demon inside the tank acting as the general of its infernal force.

A Demonica Class Land Raider is a fearsome sight to behold on the rare occasion that it can step from the warp. It stands as a war alter to Khorne. Unlike even other demon possessed tanks, the Demonica has no interior troop transport, it is instead filled with a powerful greater demon of Khorne.  Through the Demon's power the vehicle becomes a conduit for warp travel, allowing troops to assault directly into battle from the ships above, or even other warp shrouded planets. Although such travel is risky and takes up most of the demons power, so it can only be done rarely. The demonic energy does allow bloodletters to survive in close proximity to the greater demon, often riding along the hull, cutting down those who get too close the the might tank."

Some of you may remember this piece of artwork that I did quite a while ago: 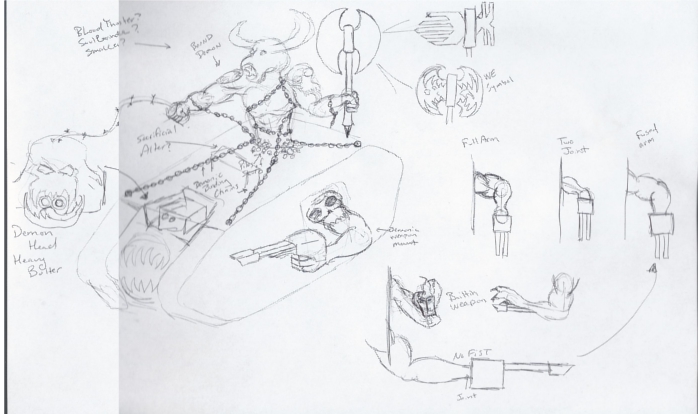 A bit of New stuff 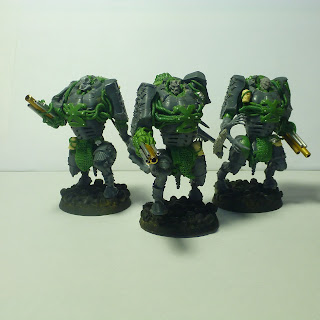 So after a long Hiatus of posting, I decided to post the finished Khornate Obliterators (actually a few rivets fell off, that I have to put back)

The conversions definitely took a lot longer than I thought they were going to, but I am pretty happy with how they turned out.

Is Everyone Eating There Khorne-Flakes?

So it has been awhile since I have posted anything, but have recently gotten back into some more serious modeling with the release of the newest Chaos Codex. I decided to do a conversion that I have wanted to do for awhile, Khornate Obliterators!

I was originally inspired by Warhammer In Progress's nurgle obliterators, and wanted to do something equally unique for my own. It took me awhile to figure out what I wanted to do, and finally I decided to move forward on the project when I picked up GSI's tentacle maker.

So here is what I have so far:

Terrors of the Deep

So I have not posted in quite awhile due to the unholy triforce of family issues, work, and the wife deciding to rearrange the whole house (including my painting room/office).

Anyway, I have been meaning to get this guy up here for awhile, I ended up re-sculpting his head from what I had posted earlier, and although not completely happy with it, I think it turned out better than I thought. I also had to stray from what I wanted to do with the Standard in order to get the appearance that I wanted. Also, not sure if I want to keep the standard how it is, I think I might change it for smaller "subtler" tentacles and try to make the fabric appear more worn and tattered. But without too much further ado, here is the standard bearer for my Son's of R'lyeh Squad. 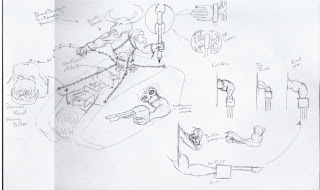 Here are some sketches that I have been working on for my second Landraider. I want it to be a main focal point for the army, and to match up in awesomeness with the first.I am thinking of really stressing the demonically possessed idea. I think a Bloodthirster torso would be the right size, but I am also thinking I might want to look at some third party mini's too, in order to give it a little different feel.

For the side sponsons I am thinking of doing demonic arms. A few questions, do you think that it is better to have the lascannons held in a fist, be the hand, or coming out of the wrist? Also what do you think about the demonic chains holding the demon to the Landraider, Good idea or not?

Posted by Tylermenz at 6:01 PM No comments:

Slaanesh VS. Khorne. Welcome to the Thunderdome!

Well, despite a growing addiction playing League of Legends online, I have managed to get some work done on the Slaanesh demon prince, the quite a bit modeled on the second berzerker squad and a bit done up on my second land raider. Without further adeiu, here are the pics,

First up, excited that he no longer has to walk everywhere like everyone else is the Slaanesh demon prince: 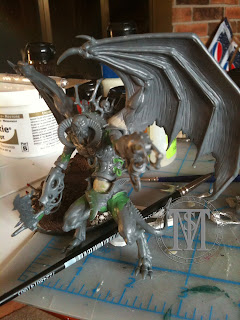 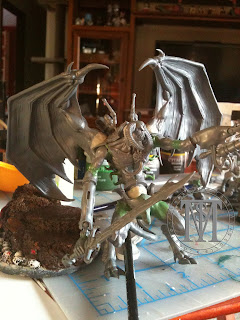 Following the newly winged horror, is the armored bulk of the red destroyer, a WE landraider, 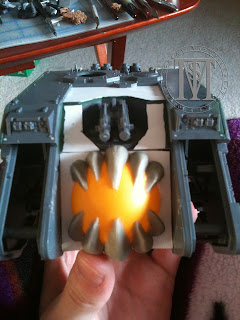 Not sure yet if the front will be hinged to actually flip up and open, or if I will just make it look like it could, but keep it sealed. I am leaning towards the second option for ease.

Finally, a new squad of bloodthirsty brutes has appeared on the horizen, praise be to the khorne, my the blood never cease flowing, 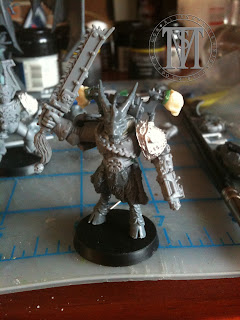 Next up is Cap't Hook, don't really wanna shake his hand 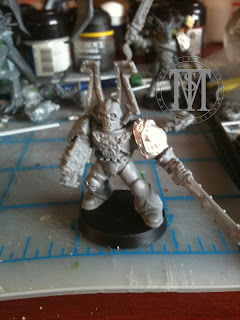 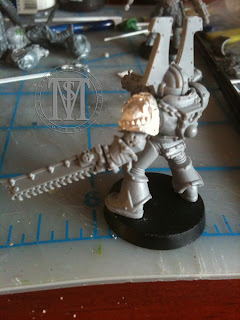 Following the Captain, is the Knight, 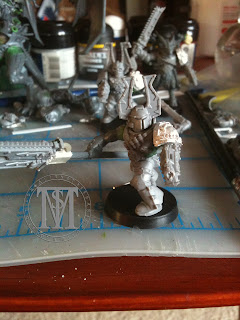 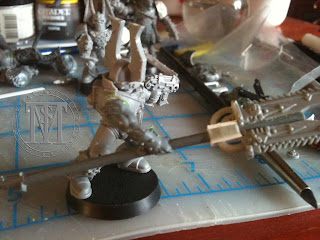 I still need to add some more detail to the glaive, but I think it is turning out nicely. 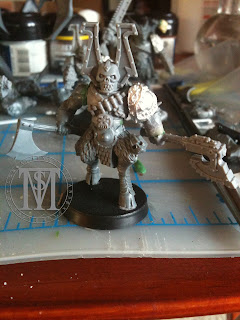 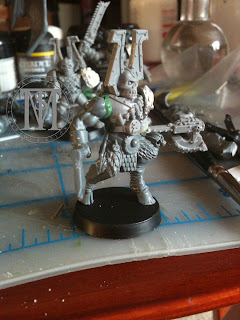 I also have three more that are almost completed, and will post them and a squad shot once I have all the backpacks made up and put on. And finally, a recent accrual of some FLGS$ saw me get a box of CSM and the Son's of R'lyeh have returned to my workbench.

Here is the beginings of the Standard bearer: 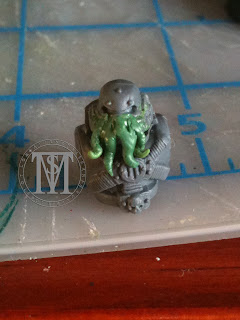 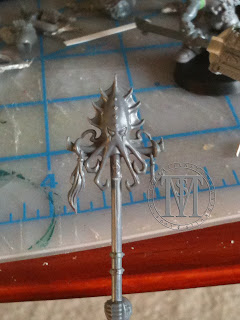 Not Quite sure about the head yet, I may redo it. I am also going to add a banner type piece under neath the squid head for the banner.

Finally, I have a question to pose to everyone, I am thinking about redoing the horns of the Slaanesh demon prince to be something like this: 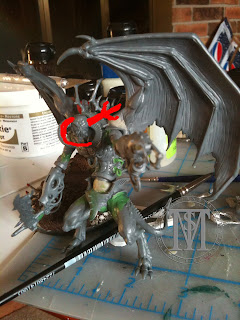 Basically making them into a symbol of slaanesh. The question is do you think it would look good? If I do this, then he will probably get quite a few more Slaanesh symbols which I have avoided putting on him thus far in trying to keep in nondenominational. Seeing as how I am planning on selling this piece, do you guys think it would be good to dedicate him to slaanesh (it is the best prince gamewise), or would it be better to leave him more neutral?

Until Next time, when I will have some concept sketches of landraiders to show, I am out!

So here are a few updates of some of the stuff I have been working on,

First up is the World Eaters Landraider, some of you may remember it from the WIP pics that I have posted Before. It is finally getting some paint, 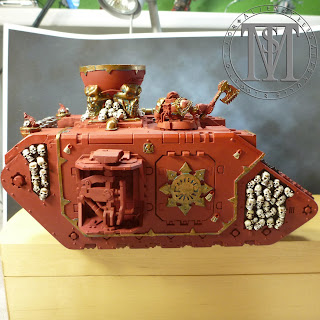 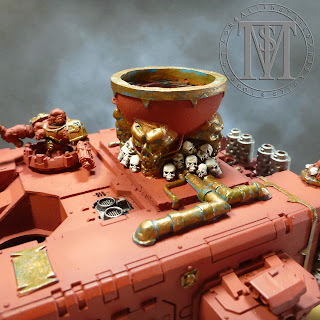 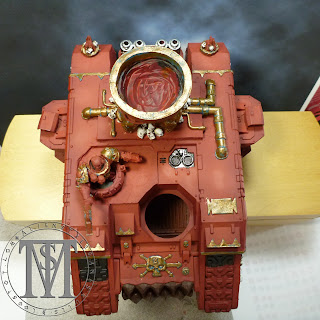 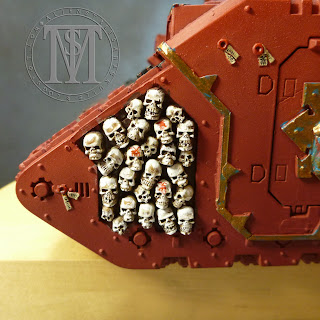 Btw, this is my first model that I really did with an airbrush (the red), and I must say that even with a crappy airfed single action, it is AWESOME. As far as painting red on large flat surfaces this was definately the coolest idea ever.

Next up is the Slaanesh demon prince that I originally posted up  Here.

A little bit more work has been done on him, added arms and reposed some stuff. I thought the old pose was boring, so I tried to make it more dynamic. 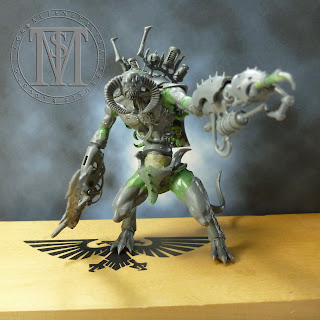 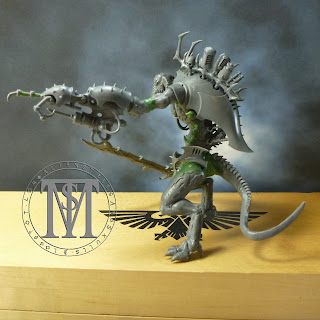 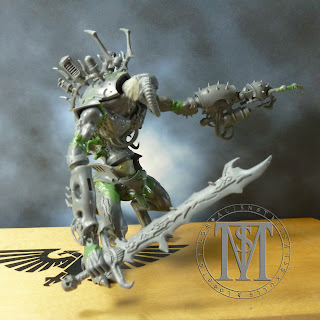 What you guys think?
Posted by Tylermenz at 6:26 PM 4 comments:

So i have been a avid wargamer for a couple years now and decided to start a blog mostly to keep me on track with modelling and painting. Also I am willing to do commissions, I am better at conversions and sculpting than I am at painting but am willing to do anything. Prices are negotiable so just email me.